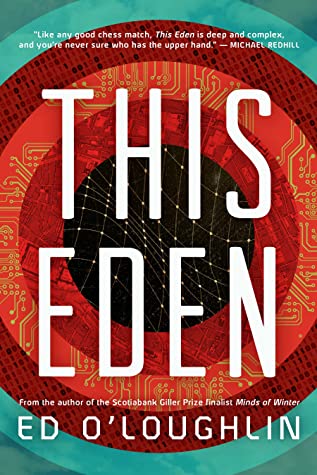 Author: Ed O'Loughlin
Scotiabank Giller Prize finalist Ed O'Loughlin returns with an exhilarating technothriller and modern spy novel reminiscent of William Gibson and the golden age of panoramic international espionage fiction. Alice and Michael meet at university: she is a young computer prodigy, he is a hapless engineer. First love is followed by a rift, and then Alice disappears -- suicide is suspected. Soon after, Michael is recruited by Campbell Fess, founder of the San Francisco tech firm Alice had been doing work for. But upon arrival, he finds himself at the centre of a con managed by a spy named Aoife, who leads him to her handler, the shape-shifting government war-gamer Towse. Michael and Aoife are plunged into an urgent struggle that neither of them understands -- one that will take them by air and sea from California to New Jersey, the Ugandan rainforest, Jordan, Jerusalem, Paris, and finally Dublin, where Fess's crowning achievement will be unveiled. With This Eden, Ed O'Loughlin has crafted the spy novel into a sharp and engrossing narrative of a world overrun by cyber-warfare, moral bankruptcy, and the assassination of identity.